* In case of any delay in receiving the OTP, you may verify it later. Please proceed without verification.

Enter your City name or Pincode

Chakdaha is a municipality city located in Nadia District in West Bengal. It comes under Kalyani subdivision of the district. This major urban local body of Nadia is situated on the banks of Bhagirathi River and acquires a distance of around 62 kms to the north direction from the state capital - Kolkata. Chakdaha Municipality is surrounded by River Ganges from its western boundary, Chanaduria and Rauturi Panchayat in the south, National Highway (NH) 34 in the east and Gangaprasadpur in the north. One can easily reach at Chakdaha via both railways and roadways from Kolkata and other important cities of West Bengal state. Know the various crucial aspects of Chakdaha by going through these given below lines. 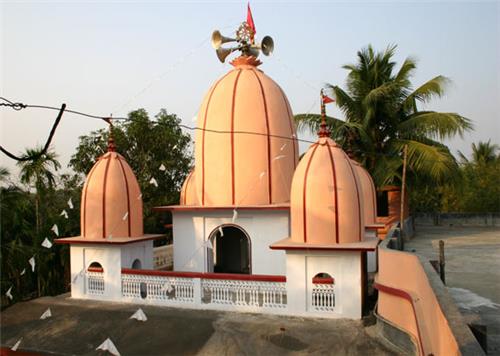 Chakdaha is one of the oldest cities of West Bengal and has lot to share. In fact, the city derived its name from its mythological past when River Bhagirathi was taking Ganga besides this path and meanwhile, the wheel of his chariot got stuck in the sand. Since then, that place famously known as 'Chakradaha' or 'Chakdaha'. People from varied religions have been living in this region and thus it has been abode of temples, mosques, and many archaeological structures. In 1885, it was a Panchayat area with mere 5000 population but a year later in 1886, it was established as a Municipality through the efforts of a British Architectural Engineer, John Beglar and Kazi Mirza Itteshamuddin became the first Chairman of Chakdaha Municipality.

The municipal town of Chakdaha is located at the latitude of 23.08° North and the longitude of 88.52° East with an average elevation of 11 meters above the sea level. The climate conditions here are largely determined by the city's strategic location. On its western boundary, River Ganges is flowing while Buriganga and Churni flow through the Old Chakdaha into the Ganga. Therefore, the soil in Chakdaha region is sandy with alluvial soil can be found in some places. The temperature here is moderate with an average summer temperature remains 38° C while the winter season brings the temperature down to 12° C. The place of Chakdaha has an average annual rainfall is almost 150-160 mm.

According to the 2011 Indian Census, the total population of Chakdaha Municipality town is 132,855 in which male population is 67,135 while the female population is 65,720. The population of Children between the age group of 0-6 is around 7.40% out of the total figure. Furthermore the report of Indian Census 2011 revealed that the average literacy rate of Chakdaha town is 90.95%, i.e. total 111,895 literate persons, which is considered higher than National Urban average of 85%. In the total literacy rate, there are 93.96% males (58,490) while there are 87.88% females (53,490) in this region. People from different religious communities are living in the different localities of Chakdaha.

The inhabitants of Chakdaha city are administered by Chakdaha Municipality, which was established way back in 1886. It works with an objective of making the administration more focused on citizens and to initiate important programmes with the assistance of the Government of West Bengal. Chakdaha Municipality has the responsibility of administering its 21 wards covering an area of 15.36 sq kms and providing services like health & sanitation, electricity, license, general administration, mutation, tax collection, solid and liquid waste management and many more. Furthermore, the villages’ panchayats come under Chakdaha Municipality are - Tautari, Talatala I & II, Simurali, Silinda I & II, Sarati, Saguna, Madanpur I & II, Kanchrapara, Hingara, Ghetugachhi, Dubra, Dewli and Chanduria I and II.

The accessibility to Chakdaha is very convenient because it is well connected to Kolkata as well as other important cities of West Bengal via road and railways. Chakdaha Railway Station is located on the Sealdah - Ranaghat Line connecting it to the Sealdah Railway Station where several local and passenger trains are operating. The rail distance from Chakdaha to Kolkata is 62 km and the local trains from Chakdaha Railway Station are available to cities like Ranaghat, Krishnagar, Shantipur, Sealdah and Gede. Passenger trains particularly between Lalgola and Sealdah are also stopped at Chakdaha. Apart from that, the state capital, Kolkata, is located at a distance of 69 km from Chakdaha via road. The municipal town has a major bus stand that connects it to Chakda-Bongaon road and NH - 34. There are frequent buses of CSTC and SBST operating through this bus stand connecting the city to Barasat, Tehatta, Aishmali, Ranaghat, Nimtala, Krishnanagar, Bethua, Baharampur and Palassey. Chakdaha also has excellent local transport as auto rickshaw or man power van rickshaw, body rickshaw and private cars are also available for the transport services of the people. The nearest airport to Chakdaha is Netaji Subhash Chandra Bose International Airport, Dum Dum, located at the distance of 58 km from the town.

Chakdaha once acquired its revenue from agriculture sector and jute industry but due to the change in the course of River, the importance of such economic sources was lost. The town was also a once major center of indigo cultivation in 18th century. The economy of Chakdaha revolves around service sector. The inhabitants of this region generally work in neighbouring areas and are employed in Kolkata. There are few small scale industries particularly plastic factories in this place. In fact, the municipality has seen a major grow in small businesses, largely because of higher density of population in the area, which contribute largely into its economy. However,

The city of Chakdaha celebrates various kinds of local and national festivals. It is comprised mainly by Bengali Hindus and thus the festival of Durga Puja is mostly celebrated throughout the city. During this festival, the Youth Club, Maa Bhavani Shebok Sangha, Momimala, Chattra Milani Club and many more organizations conduct grand theme pujas of large budget. Apart from this festival, the inhabitants of Chakdaha also celebrate the occasion of Kali Puja, Rath - Yatra, Jagaddhatri Puja, Dol Yatra and Chattra Milani wholeheartedly. Ganesh Janani Mela here is among the oldest fairs organized in Nadia district with almost 350 years. Besides that, Basanti Durga Puja is also celebrated in March / April months every year at Basantitala.

Several entertainment hubs are located in Chakdaha municipality town. It has only one theatre with the name as Bharati Hall or Dolby - DTS. Besides that, the city also witnesses many cultural programmes primarily organized in the Chakdaha Pouro Mukto Mancha and the Sampriti Manch. Flower Exhibition and Chakdaha Book Fair are also starting to be organized every year in the town from the year 2014. Moreover, the city also has an open air stage or Mukta Mancha which is named as Chakdaha Pouro Mukto Mancha. Apart from the cultural programmes, the people of Chakdaha also like sports with mainly Cricket and football with Karate also has its fans in this region.

The municipal town of Chakdaha has sufficient amount of healthcare services provided within its hospitals. The city has located one general hospital which is known as ‘Chakdaha Hospital’. This healthcare center has a team of experienced doctors and staff who provide treatments for almost all medical ailments. Besides that, the hospital has equipped with latest medical tools helping in providing solution for any medical problem. The city of Chakdaha also has a veterinary hospital in which proper medical care is provided to the animals. See below the addresses of both these hospitals.

The inhabitants of Chakdaha Municipality town really enjoy the availability of banking and postal services. By the presence of these utility services, they can relate themselves with the various schemes of national and state governments. The different localities of Chakdaha have located various branches of nationalized and state banks in which entire banking services along with ATM facilities are provided to the people. In similar manner, the post office of Chakdaha is committed to provide local and national postal services.

Chakdaha at a glance

Comments / Discussion Board - About Chakdaha